The exposition of the Tanbaly Reserve-Museum consists overwhelmingly of "immovable" planes with petroglyphs located in the natural landscape of the Tanbaly tract, as well as other monuments that make up a single archaeological complex. In general, it is formed by about a hundred monuments of different times - settlements, burial grounds, ancient quarries, petroglyphs and religious buildings (altars) – dating in a wide range from the middle of the XIV-XIII centuries BC to the turn of the XIX-XX centuries. In this sense, the design and management of the exposition of landscape museums "in the open" has significant features, specifics that distinguish expositions in a natural environment from ordinary museum expositions. The creation of the museum was preceded by a detailed archaeological study of the entire archaeological complex, it was necessary not only to highlight the specially protected territory of the monument, its buffer zone. The peculiarities of the exposition of the reserve-museum include the fact that excursions on the territory are conducted by specialized guides and employees of the reserve-museum "Tanbaly". The tour begins with a burial ground located on the foothill plain, belonging to the Late Bronze Age (12-10 centuries BC). Then the tour route passes through the central part of the reserve-museum, where the largest number of petroglyphs are concentrated, which are divided into five groups of petroglyphs and with a visit to the burial ground of Tanbaly-2 of the Late Bronze Age.  A visit to the petroglyphs begins with the 2nd group closest to the entrance to the tract of the group

Petroglyphs of the 1st group number 111 petroglyphs, most of which are sketches and unfinished drawings of the Bronze Age, individual figures of large animals, up to 60-70 cm.

The 4th group of petroglyphs forms the semantic and compositional center of the sanctuary. There are more than 700 petroglyphs here, most of them are hardly expressive and belong to the Early Iron Age, the Middle Ages and Modern times (17th-19th centuries). Of exceptional value is a unique panel of the Bronze age pantheon, on which 7 divine characters of an ancient pagan cult are represented in a certain order and each in his own way, and below 10 are warriors in a battle dance, a woman in labor and people who raised their hands in prayer.

The 5th group of petroglyphs has more than 1000 rock carvings. The Bronze Age includes several large panels depicting animals (with stripes on the body of bulls, wild boar, horses, etc.), chariots and carts pulled by a camel, as well as mythical images of palitsenos and "sunheads". In total, 11 images of deities have been preserved on the rocks, but almost all of them repeat the appearance of the main characters of the "pantheon" depicted on the 4th group.

The 6th group of petroglyphs is located at some distance from the central zone of the tract, and currently visiting it is not included in the main tour route. However, this cluster of petroglyphs, compactly on one hill, has a number of petroglyphs of the Turkic time, quite unique and emphasizing the originality of rock art of this period.

The 7th group of petroglyphs A visit to the 6th group will be included in the long version of the visit to the 7th route being created: "Rock art of Tanbaly of the Turkic period", which will be based on a visit to the petroglyphs of Sunkarsai, the closest to Tanbaly from the north. 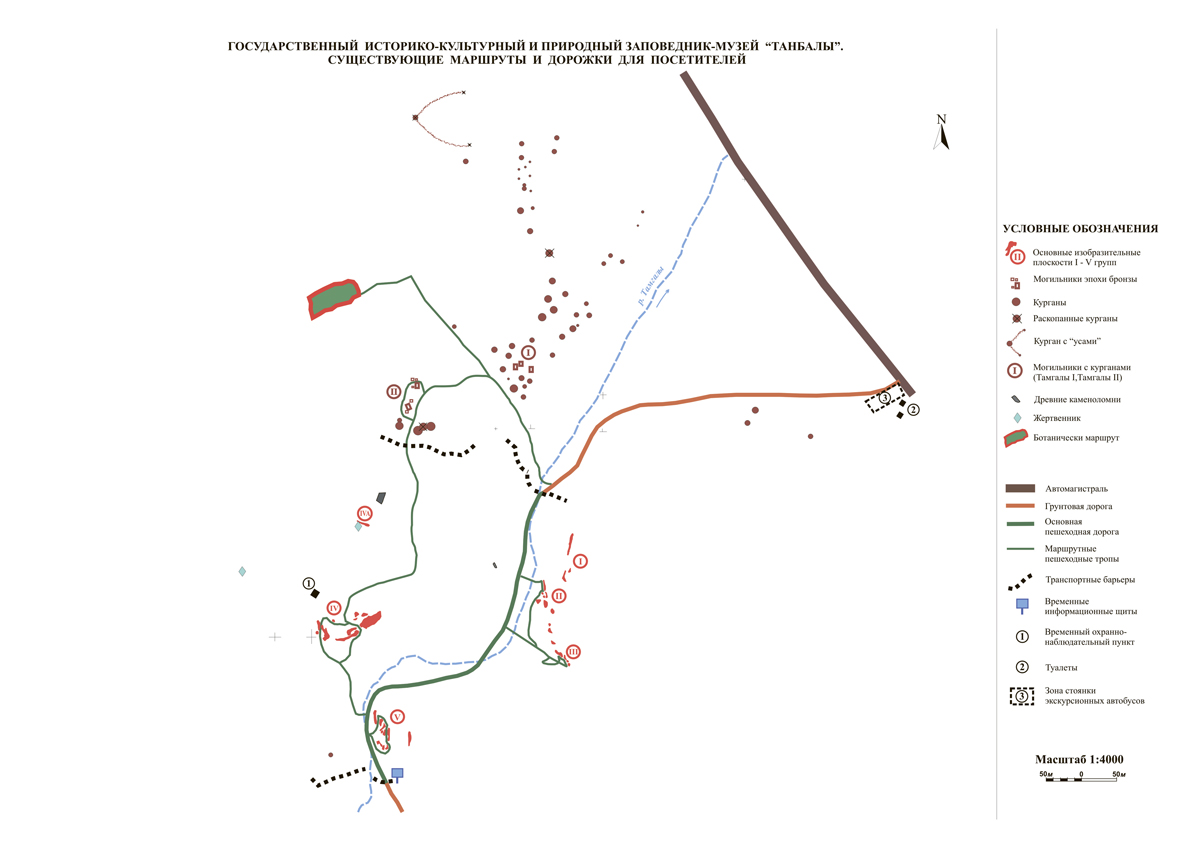 Settlements in Tanbaly are located exclusively in the mountainous part of the tract. In the conditions of hilly relief (melkosopochnik) settlements occupy a small area from 300 to 1200 mI and are located in various geomorphological conditions: on wide areas of valleys, gentle slopes of small gorges (sai) or on elevated areas of the so-called "hanging" valleys. Despite the differences in topography, all sites have a southern, south-western or south-eastern exposure. The presence on most settlements of the remains of stationary buildings (dwellings, cattle pens), as well as the specified location features indicate their long-term, mainly seasonal (in winter), use by ancient pastoralists of Tanbaly. Along with stationary settlements, a small group of monuments with the remains of stone pens and an insignificant cultural layer, including mainly the bones of domestic animals, is distinguished. Such monuments are classified as temporary settlements, or parking lots, of spring-autumn seasonal use and belong to the culture of the nomads of modern times

Rare plants listed in the "Red Book of Kazakhstan". 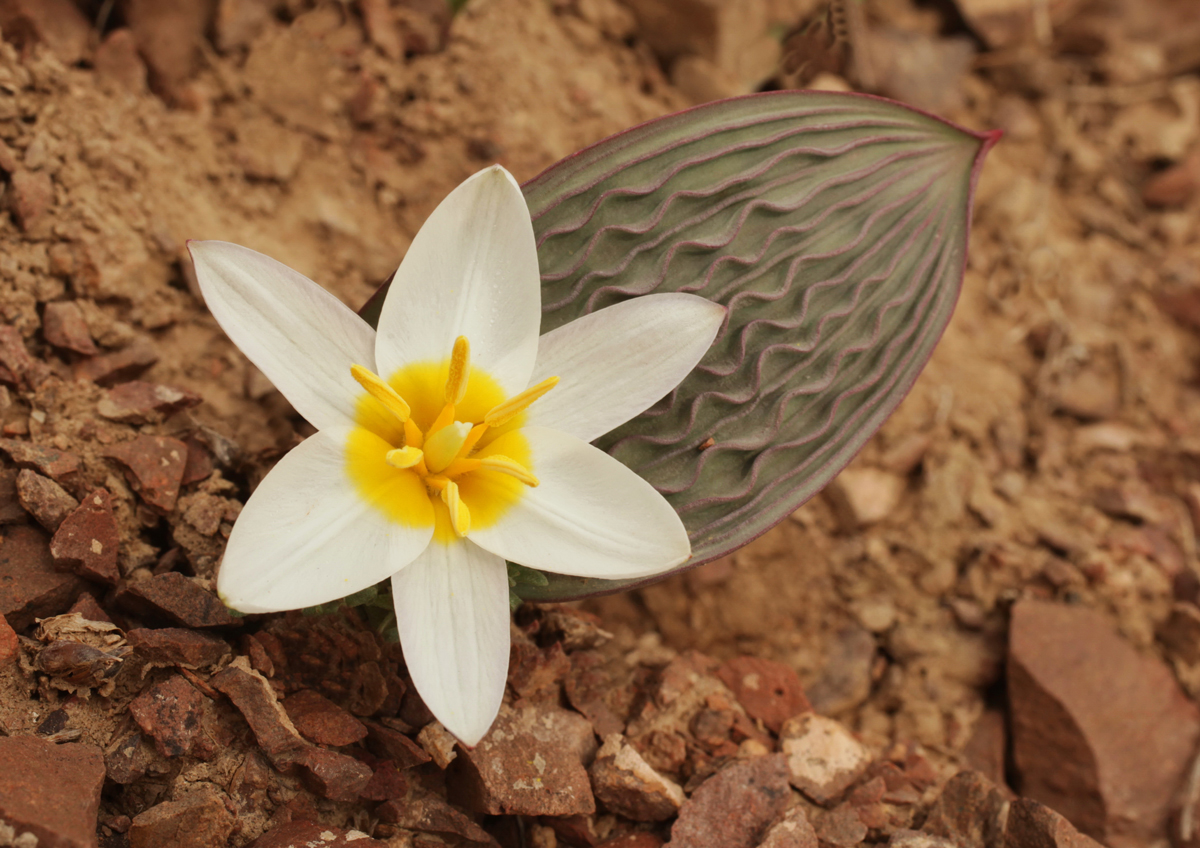 The family Liliaceae is Lily. A rare species. It is an endemic species of low mountains of the Almaty region. It is of scientific interest as the only representative of the section. The most original of all Kazakhstan tulips. The bulb is up to 2.5 cm in diameter, with dark brown leathery scales. The stem is very short, strong, not drooping. The leaf is usually one, oblong, less often oval, glaucous, often with a brown tinge. Its outer surface has many parallel ridge-like outgrowths, which creates a structure similar to corrugated fabric. The flower, as a rule, is also single, small, up to 3 cm tall. The leaves of the perianth are white from the inside with a clearly delimited yellow spot, the outer ones on the back are light purple. The staminate filaments are pubescent, like the anthers, yellow. The increase in the number of flowers and leaves observed by Z.P. Bochantseva during cultivation is also not uncommon in nature — out of almost 2000 individuals of this species viewed by us in various years, 1.8% had 2, less often 3 leaves and 2 or 3 flowers. The fruit is 1.5-3.2 cm long and up to 1.8 cm wide, the number of normally developed seeds is up to 180. Reproduction is seminal, very rarely vegetative.

Propagated by seeds. It is characterized by very early vegetation. Blooms from late March to mid-April, bears fruit in late May - June.

Habitats. Gravelly and rocky slopes, scree, variegated clays, fine-grained peaks of hills, mainly in the upper and middle parts of the slopes of the southern exposure.

Historical background. The genus Juno, named after the goddess of the Romans, the patroness of women, was described in 1821 by the European botanist L. Trattinik (1764-1849). The independence of this genus is not recognized by all experts, many attribute it in the rank of a special section to the genus Iris L. This species was first described in 1905 by B.A. Fedchenko (1873-1947) at the collections of the Russian botanist A.A. Kushakevich, after whom it is named. Type in St. Petersburg.

A brief description. The bulb is ovoid, about 1.5 cm in diameter, with many cord-shaped roots. The stem is short, up to 10 cm, with densely arranged sickle-shaped dark green leaves. The flowers are single or in an amount of 2-3, rather large - 3-5 cm across. The color ranges from purple and light purple to dark purple. In the Chu-Ili Mountains, albino individuals are sometimes found - with pure white flowers. The outer leaves of the perianth with a large dark purple spot on the bend, the inner ones are bent, small, up to 1.5 cm long, with a sharp three-lobed plate. The fruit is an elongated tricuspid capsule, up to 3.7 cm long and 0.6-1.5 cm wide, the number of normally developed seeds is up to 46. Seed reproduction, less often vegetative (formation of daughter bulbs). Blooms from late March to mid-late April, bears fruit in late May - early June. It grows in the foothills and low mountains, on gravelly slopes, colorful clay mounds. Distribution in Kazakhstan. The eastern part of the Kyrgyz ridge, the Chu-Ili Mountains, the Trans-Ili Alatau (Zhambyl and Almaty regions). The range of the species only slightly extends beyond the borders of our Republic - to Kyrgyzstan. 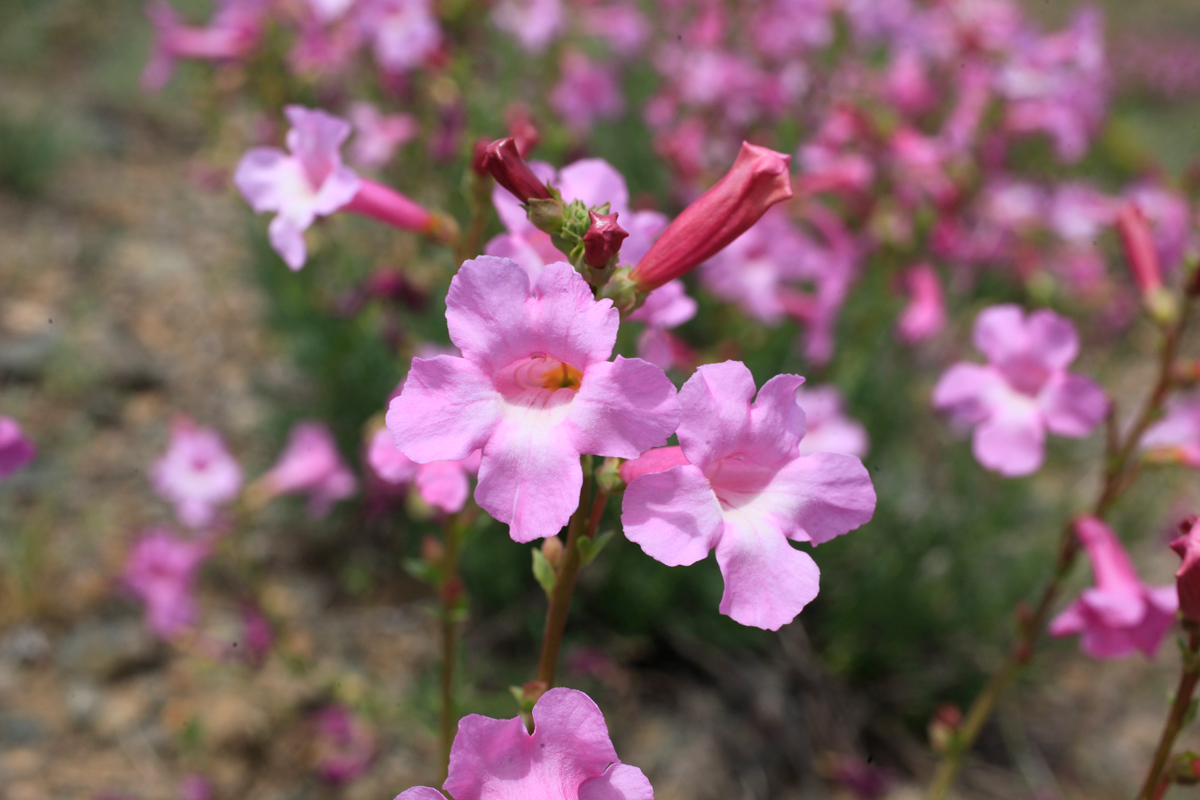 Niedzwedzkia semirechenskaya (Niedzwedzkia semiretshenskia) is a perennial up to 35 cm tall, the stems at the base are woody, the leaves are alternate, pinnate or finger-dissected, the flowers are large tubular-funnel-shaped, pink-red in a raceme inflorescence. A relict narrow-locality endemic of the Chu-Ili Mountains, a representative of a monotypic genus. Decorative. It is used in folk medicine. Clay and gravel slopes and plumes of desert lowlands.

Historical background. It was described in 1877 by E. L. Regel from samples collected in the Karatau mountains by his son Albert Regel, who worked as a doctor in Kuldzha from 1876 to 1885 and collected plants on the instructions of the St. Petersburg Botanical Garden. This and other species are named after him.

The type is stored in the herbarium of the Botanical Institute of the Russian Academy of Sciences (St. Petersburg). The family Liliaceae is Lily.

A brief description. The bulb is ovoid, up to 3-4 cm in diameter, with leathery dark brown, extended scales. The stem is strong, squat, up to 20 cm tall. The leaves (3-4) are glaucous, wavy along the edge, gradually decreasing upwards, the lower one is elliptical, the upper one is lanceolate. The leaves are very decorative, with a clear dark shading, the peduncle is short. The flower is goblet-shaped, up to 7 cm tall; the outer leaves of the perianth are pointed, the inner concave, with a rounded or slightly notched tip. It is distinguished by a large polymorphism of color - from pure yellow, orange and mottled - to scarlet and crimson-red. The bottom of the flower is often black from the inside. Yellow-flowered forms have red stripes on the back and triangular spots on the inside of the tepals. Anthers are dark purple or yellow. The fruit is up to 6 cm long and 2.5 cm wide, the number of normally developed seeds is up to 240. Reproduction is seminal, very rarely vegetative. Blooms from the beginning of April to the end of the first decade of May, bears fruit in May - June. It grows in the foothills and low dry mountains, on gravelly and rocky slopes with sparse vegetation. 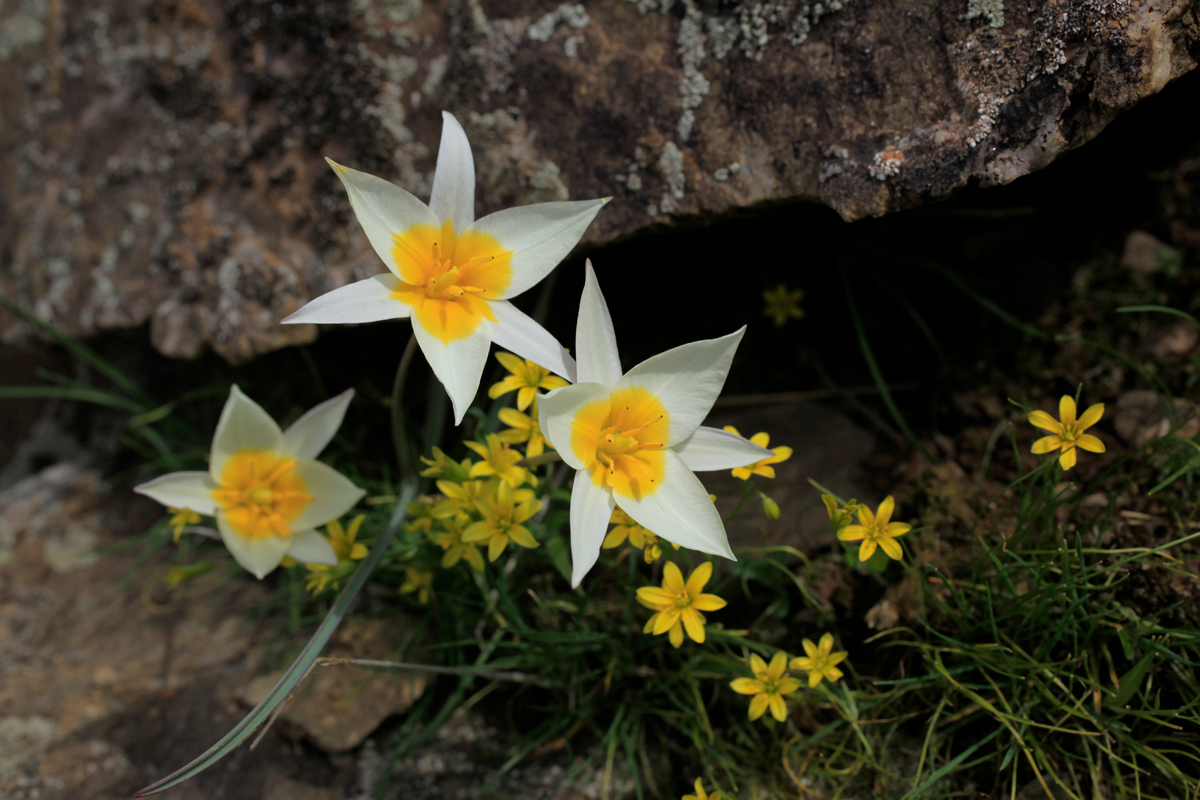 Boissier (Boissier Pierre Edmond, 1810-1885) on the collections of Fyodor Alexandrovich Buze (1821-1898) from Iran. Earlier, A.I. Vvedensky (1935) in a summary on the flora of the USSR gave data on the location of type specimens in St. Petersburg. However, later V.I. Gruboe (1977) found out that the type of the species is stored in Geneva. The same author also revised the scope of the species' range, including the Balkhash region and part of Dzungaria. The type is stored in Geneva. The family Liliaceae is Lily.

A brief description. The bulb is up to 1-1.5 cm in diameter, with brown leathery, thin-haired scales at the tip. The stem is 15-40 cm tall, usually glabrous, with 2 strongly spaced linear narrow leaves that do not reach the flower. Flowers in an amount from 1 to 6-8, droop after flowering. The leaves of the perianth are white, with a yellow spot at the base, the outer ones on the back are dirty purple, twice as narrow as the inner ones. Staminate filaments are yellow, with a thick hairy ring at the base and sparser pubescence throughout the thread, anthers are short - 4-6 mm. The fruit is an oblong, sometimes almost spherical capsule, up to 2 cm long and about 1 cm wide. The number of normally developed seeds is up to 117. Seed reproduction. Blooms in late March - April, bears fruit in late May - June. Sandy and clay deserts, fine-grained areas of low mountains.

Distribution in Kazakhstan. The southern regions of the Republic are from the Aral Sea region to the Balkhash-Alakol basin (the southern part of Aktobe, Kyzylorda, South Kazakhstan, Zhambyl and Almaty regions). In the Tambaly Nature Reserve, the most massive of tulips.