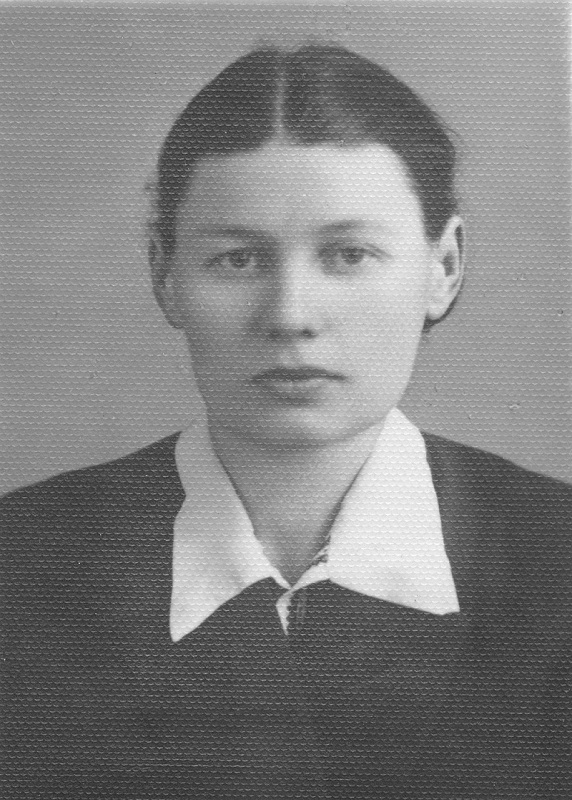 The history of discovery. The Tamgaly petroglyphs were discovered by an archaeological team led by A.G. Maksimova in 1957. Since the 1970s, A.N. Maryashev was engaged in the study of petroglyphs, later an expedition led by him, as well as A.G. Medoev, who made a significant contribution to the study of petroglyphs of Kazakhstan. Since the 1990s, the expedition, which continued archaeological research, was led by A.E. Rogozhinsky. A huge number of scientists, local historians, and volunteers made their contribution.

The history of the organization of infrastructure around the heritage of Tamgaly, its protection, preservation, management, dictated by the need for careful treatment even to any fragment of it and a separate monument, also possessing the fullness and uniqueness of the monument of historical and cultural heritage, the creation of a museum-reserve has its own long history. For decades, the study and documentation of petroglyphs and other monuments, the geology of the tract, the addition of the excursion trail and materials for the excursion route, its improvement, the first attempts to preserve petroglyphs, etc. were carried out. This activity attracted the attention of the international community, interaction with which helped to realize and formulate the universal significance of this monument for all mankind.: 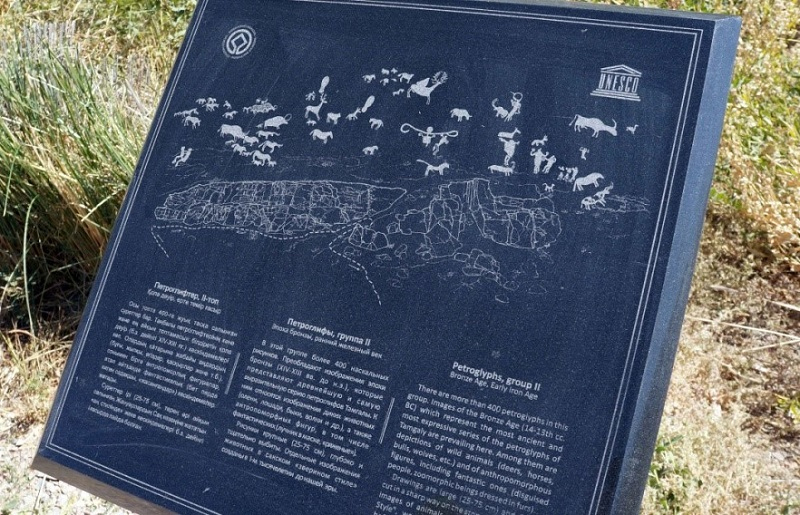 In October 2001, by a special decree of the Government of the Republic of Kazakhstan, the monument was included in the State List of Historical and Cultural Monuments of Republican Significance under the name "Tamgaly Complex" 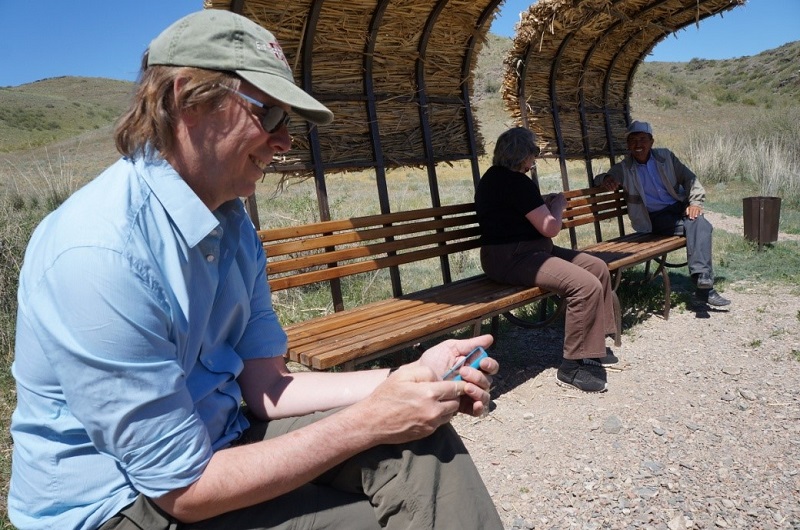 An agreement was signed between UNESCO and the Government of Kazakhstan on the implementation of the UNESCO-Norwegian-Kazakh project "Management, conservation and presentation of the Tamgaly Rock Art monument" on 19.12.2003.

In June-July 2004, on the basis of the previously submitted dossier of the monument and the Master Management Plan for Tamgaly, the nomination was discussed at the next 28th session of the World Heritage Committee, which decided to include Tamgaly in the UNESCO World Heritage List.

In 2003, the functions of heritage management, control over the execution of works by various specialists were assumed by the manager of cultural and natural heritage "State Historical, Cultural and Natural Reserve-Museum "Tamgaly", the territory of the reserve is 3800 hectares.

Management of cultural landscapes is a relatively new type of museum activity for Kazakhstan. The basis of its management activities based on the developments of the World Heritage Center is the principle of authenticity of the object, literally: the sincerity and authenticity of any fact of reality related to individual memory or public cultural heritage. In the context of cultural planning and the development of amenities on sightseeing routes, authenticity is directly related to the cultural identity of the place, or cultural landscape.

Management and preservation of a unique monument representing a very significant archaeological complex of Tamgaly/Tanbaly, the special significance of which was confirmed by its inclusion in the World Heritage List, is carried out by the historical, cultural and natural reserve-museum "Tanbaly". "The Modern Museum-Reserve is a cultural institution created to ensure the preservation, restoration, study and public presentation of integral territorial complexes of cultural and natural heritage of material and spiritual values in their traditional historical (cultural and natural) environment." UNESCO nomination: "Petroglyphs of the archaeological landscape of Tamgaly" clearly emphasize the importance of the cultural landscape of this area for all mankind.

The activities of the reserve-museum are multifaceted. One of the main problems faced by any reserve-museum and, in particular, a World Heritage Site today is the complexity of the tasks that it must perform in relation to modern society: preserving the integrity and pristine nature of heritage sites, as well as providing access to the general public: so that the public realizes the true value of these objects, and there is a broad exchange of knowledge.

The complex of archaeological monuments, or the cultural landscape of Tamgaly has a complex structure, including numerous and multi-temporal burial grounds, altars, quarries and, of course, rock carvings, the main clusters of which are marked by multi-temporal sanctuaries. Petroglyphs were carved on rocks covered with a black patina, starting from the Bronze Age (mid-II thousand BC), were continued in the early Iron Age (I thousand BC), as well as in the Middle Ages (VII - XII centuries AD) and the late Middle Ages (in the ethnographic period). Many ancient drawings were updated and supplemented in subsequent periods. Thus, the Tamgaly complex includes a natural and cultural landscape, which includes the entire set of monuments of historical, cultural and natural heritage.

The museum staff organizes various excursions not only to the unique sanctuary, but also to nearby complexes, developed excursion routes to remote groups of petroglyphs, among which priority is given to medieval Turkic petroglyphs. 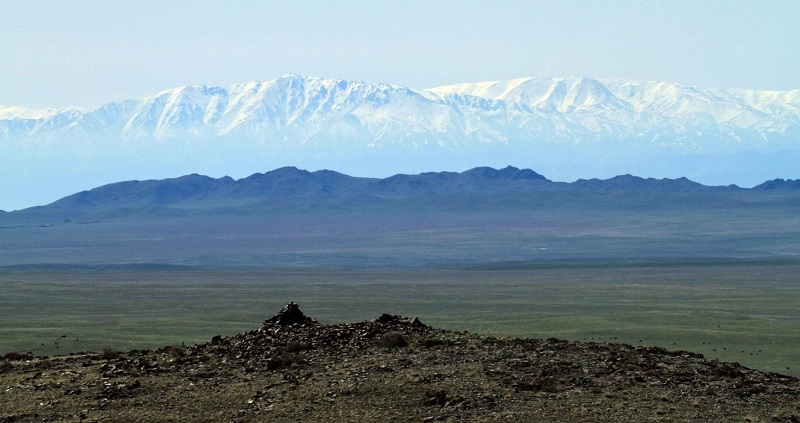 INFORMATION ABOUT THE VISIT CENTER

In 2019 The Visitor Center of the reserve-museum "Tanbaly" was built. A modern building that meets all modern requirements, is equipped with an exposition hall, a conference hall, a library, a laboratory, office rooms, a canteen, a hostel and an ethnic village for tourists. 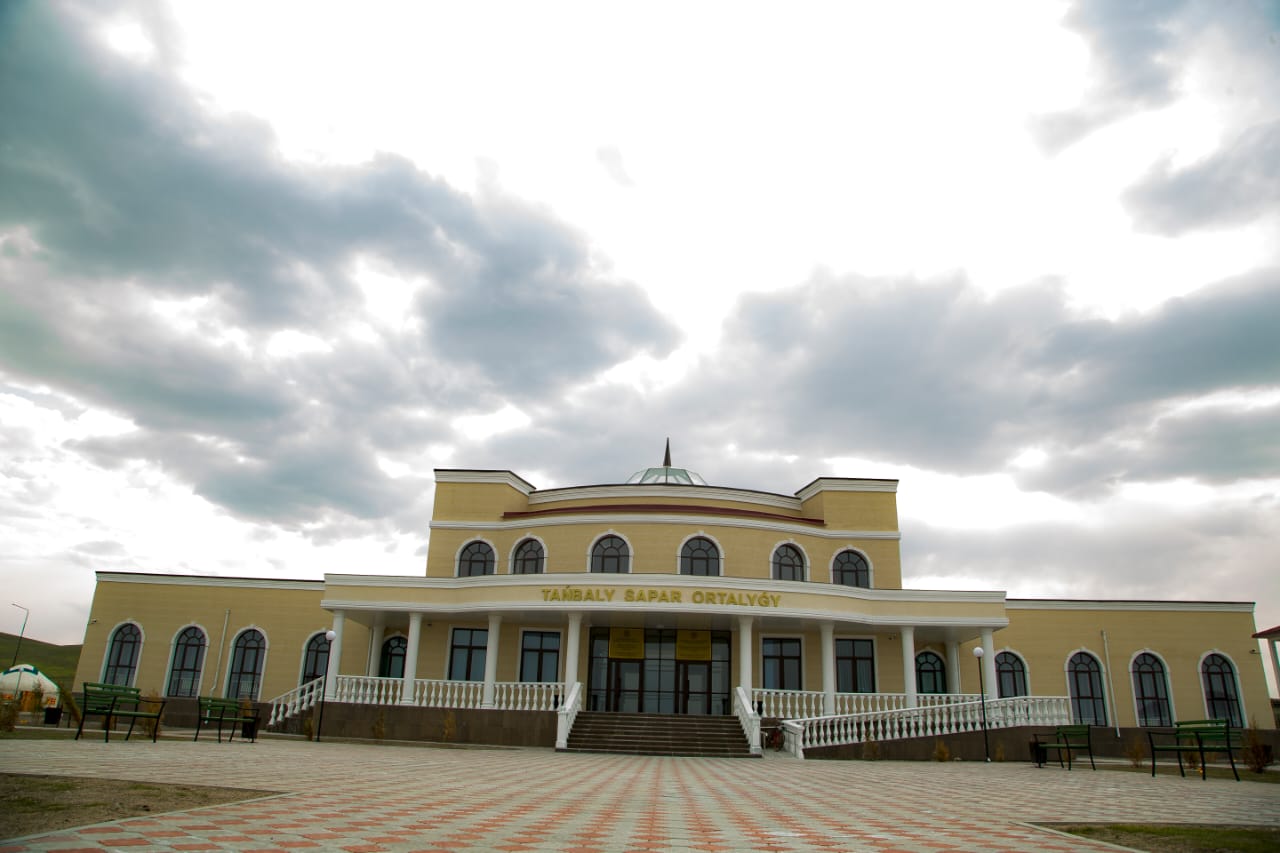 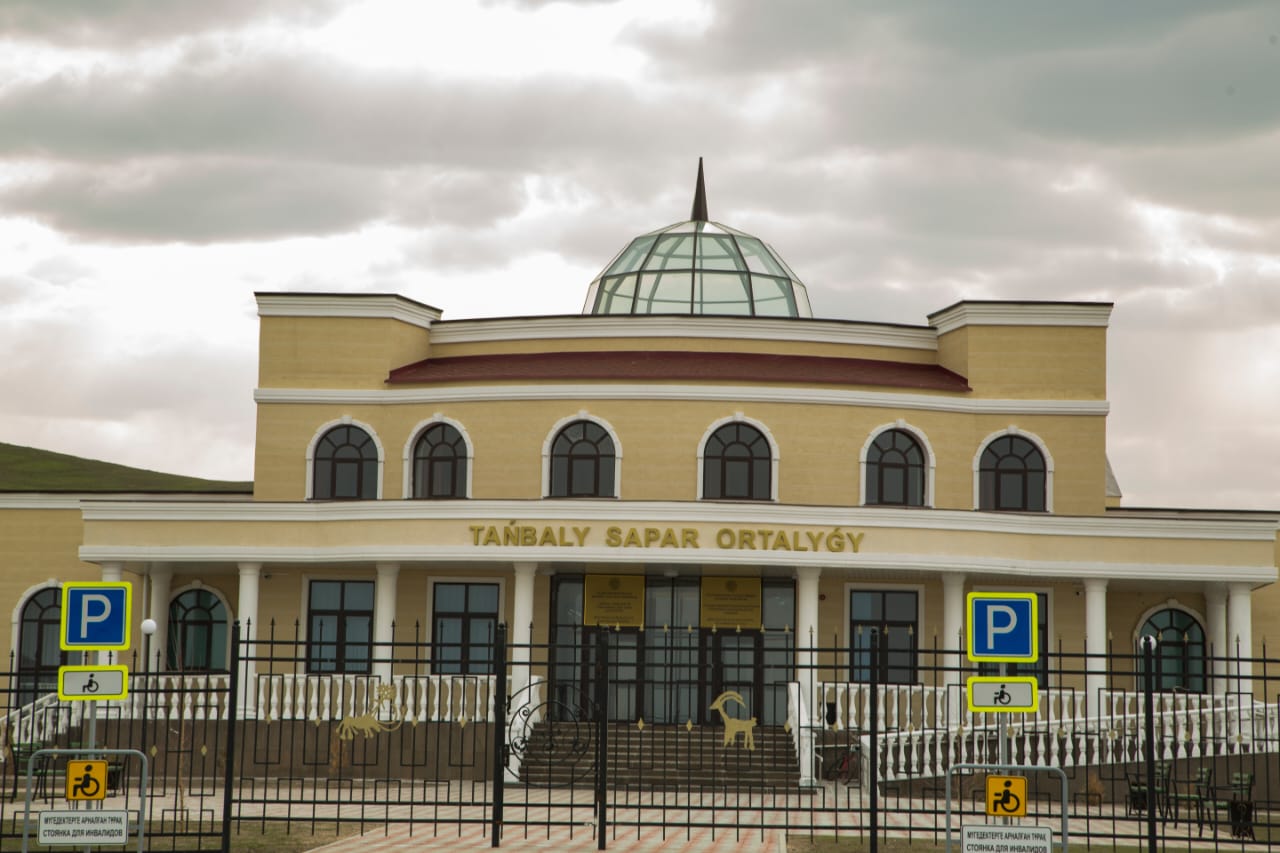 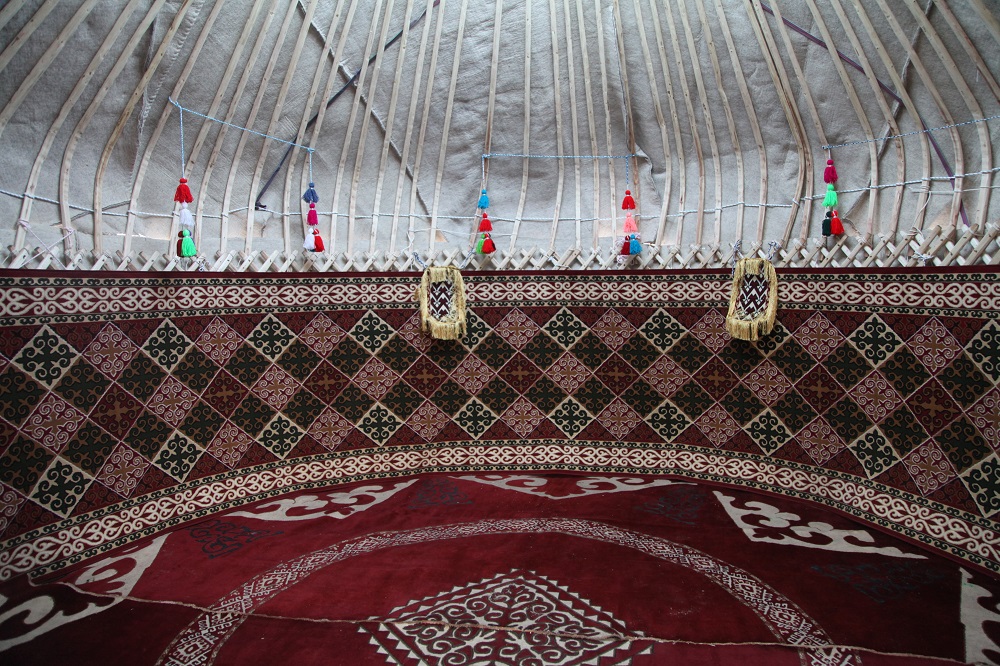 The visitor center of the State historical, cultural and natural reserve - museum "Tanbaly" is a complex of 2 buildings combined with each other. The building "Visit Center" includes:

- Hostel with a catering unit;

On the ground floor there are: a reception desk, a shop, a cloakroom, rooms for tour guides on duty, a conference room for 108 people with a hanging projection screen and a projector. Meeting table for 10 people. Laboratory with the necessary set of furniture. Library with book depository. Showroom, server room and storage rooms. 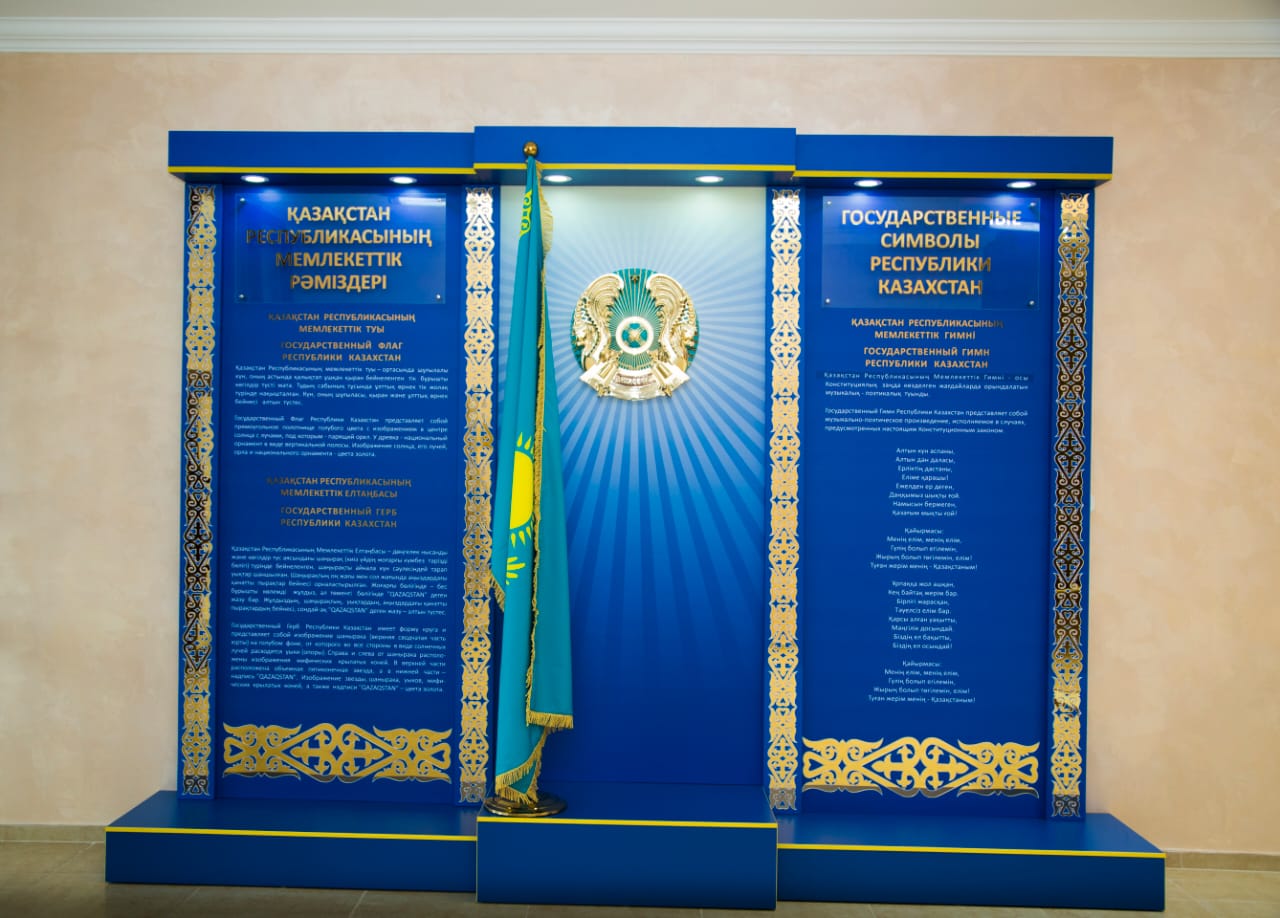 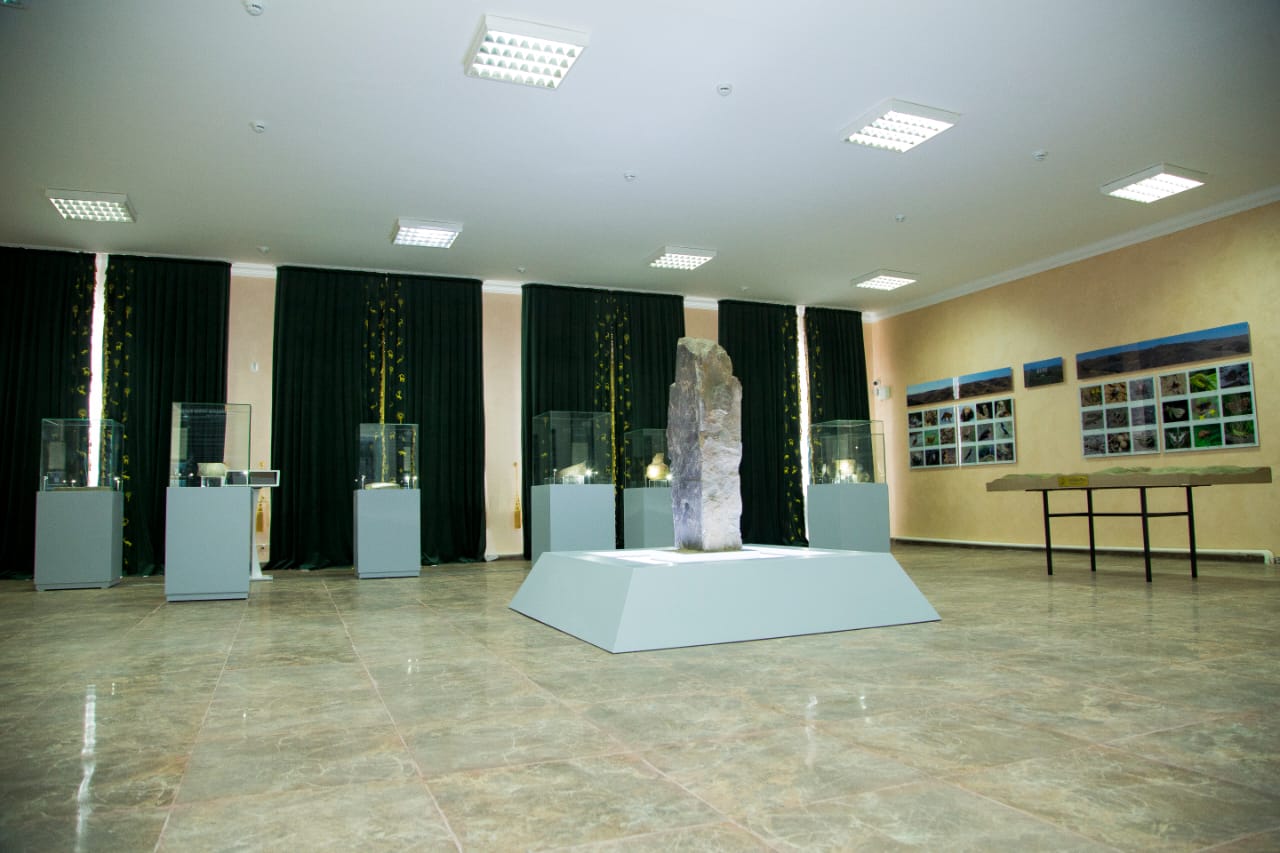 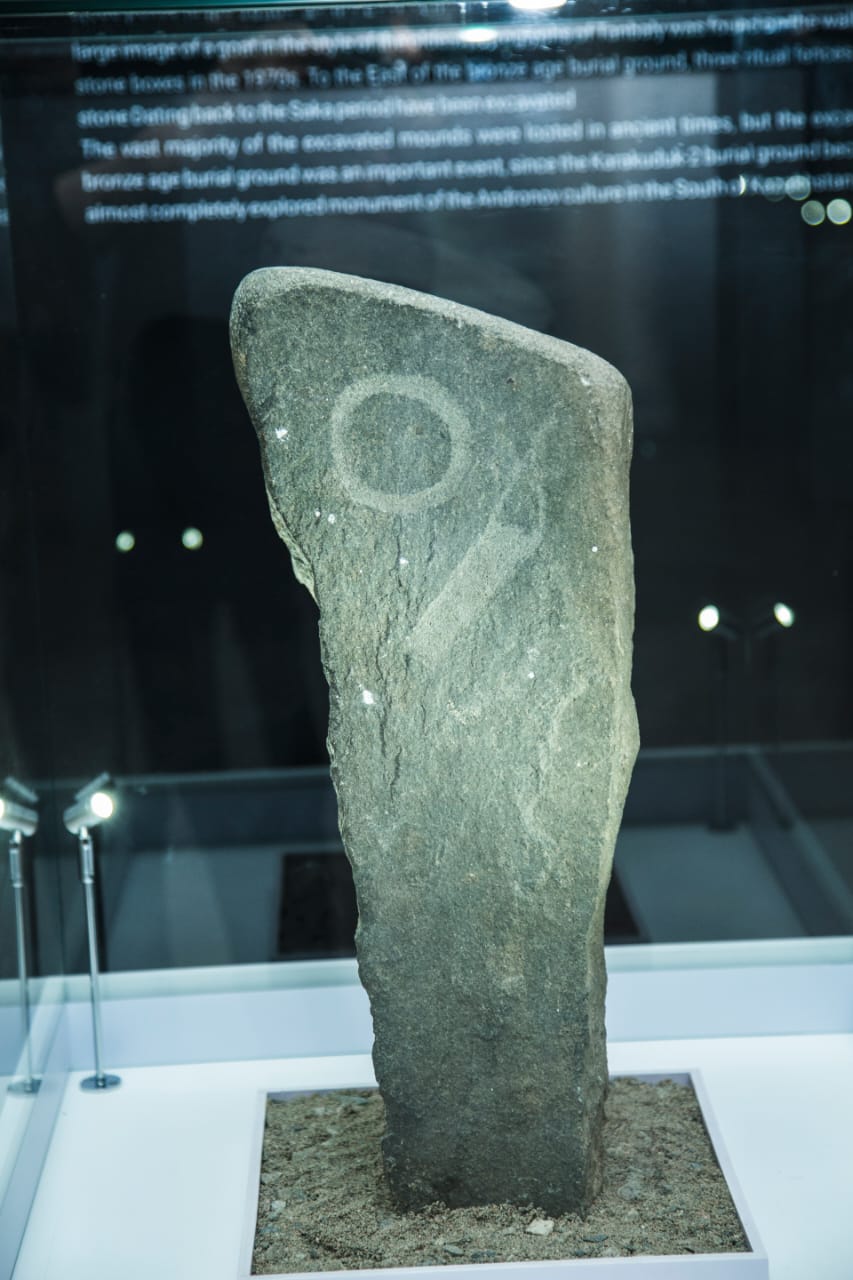 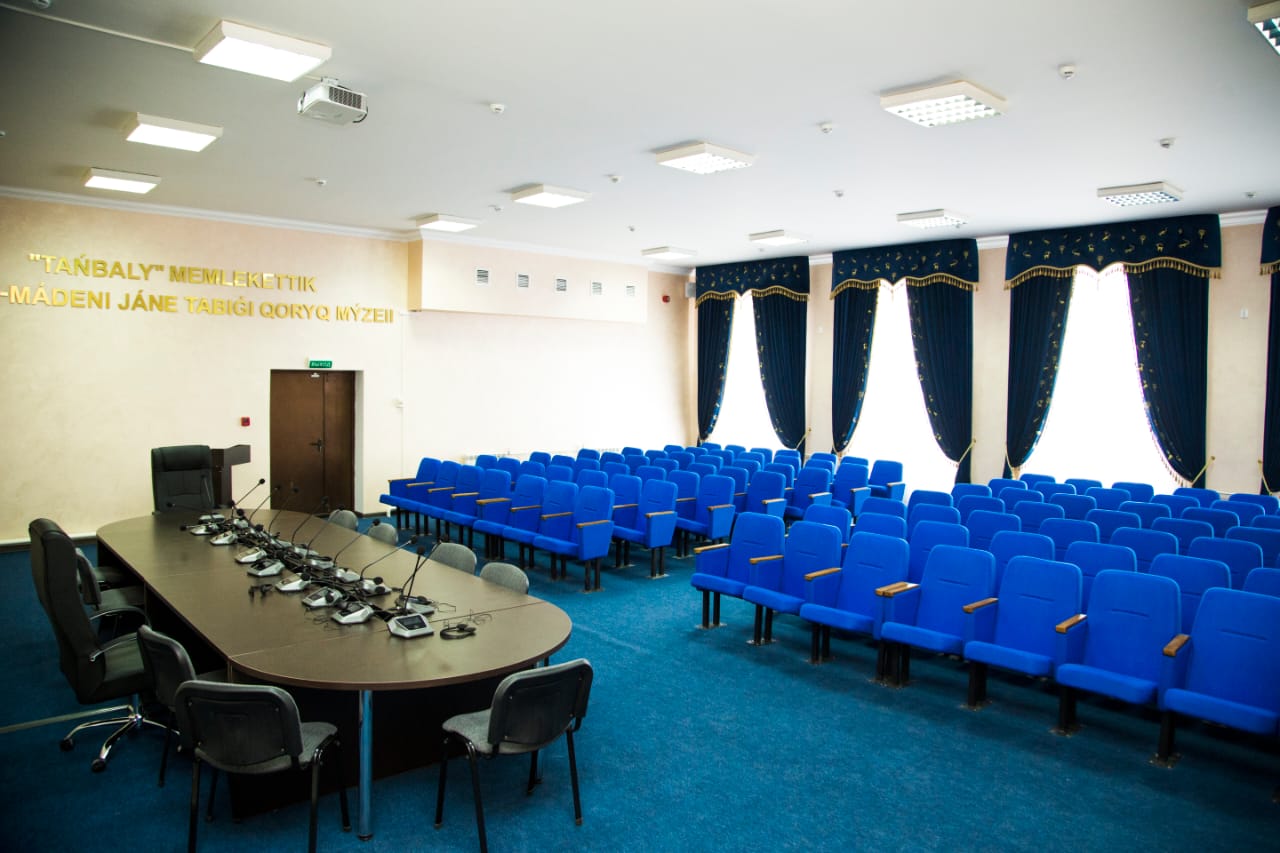 On the second floor there is an office consisting of 12 offices for employees, all offices are equipped with the necessary set of office furniture, as well as office equipment.

The building for a hostel with a catering unit also includes two floors. The first floor is equipped with a catering unit: the dining room is designed for 80 seats. Space-planning and constructive solutions provide for the flow of technological processes, excluding oncoming flows of raw materials, raw semi-finished products and finished products, used and clean utensils. Hot, cold shop is equipped with thermal, refrigeration, mechanical and auxiliary equipment. Heating and auxiliary equipment are installed in independent parallel lines, taking into account the convenience of their maintenance. Washing of kitchen and tableware is carried out in specially designated areas. Delivery of products is carried out through the loading area, storage and household premises are also provided. On the second floor there are 8 living rooms for 16 people, as well as two VIP rooms. All rooms provide the necessary set of general-purpose furniture, such as a single bed, a table with chairs, a wardrobe, a telephone. There is a laundry room equipped with two washing machines, an ironing board with an iron and a production table, and bathrooms and shower rooms are also located on the second floor. 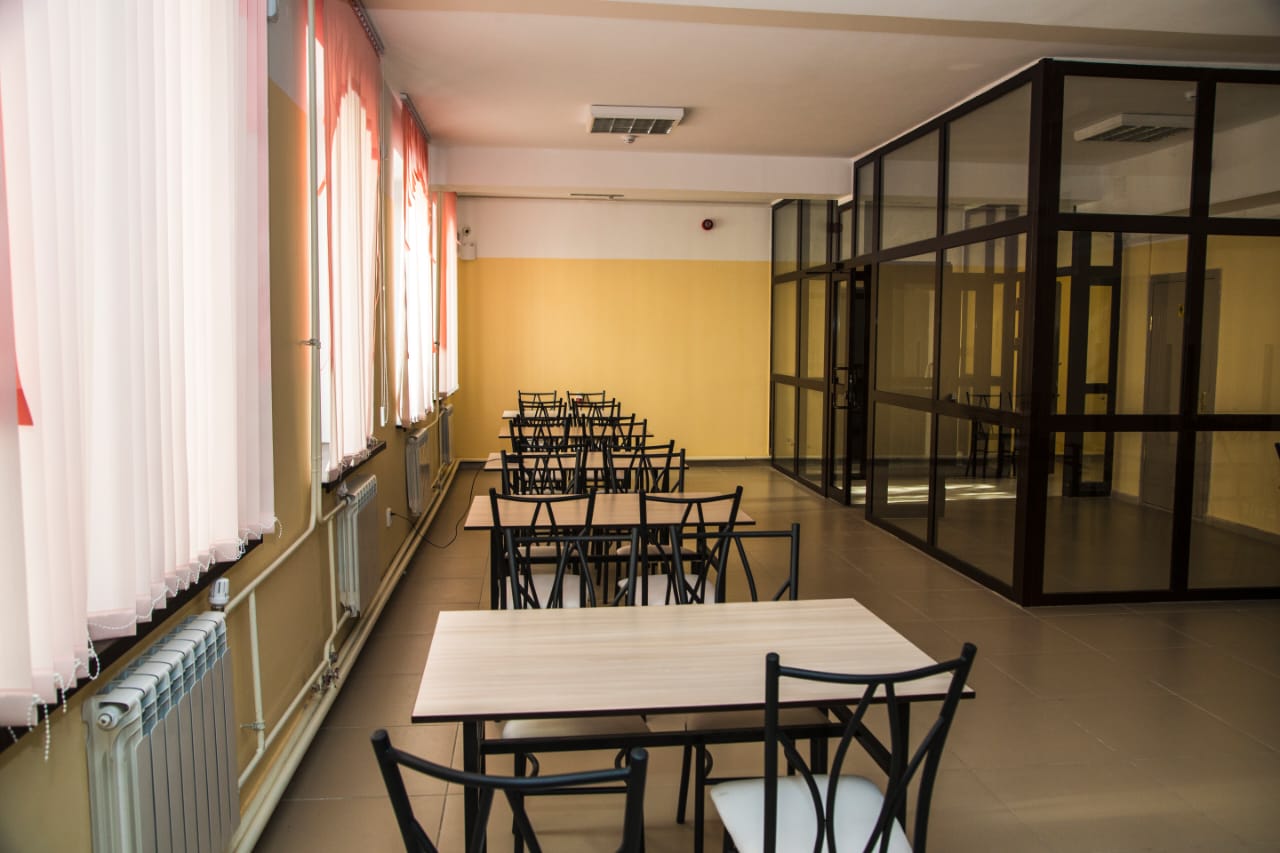 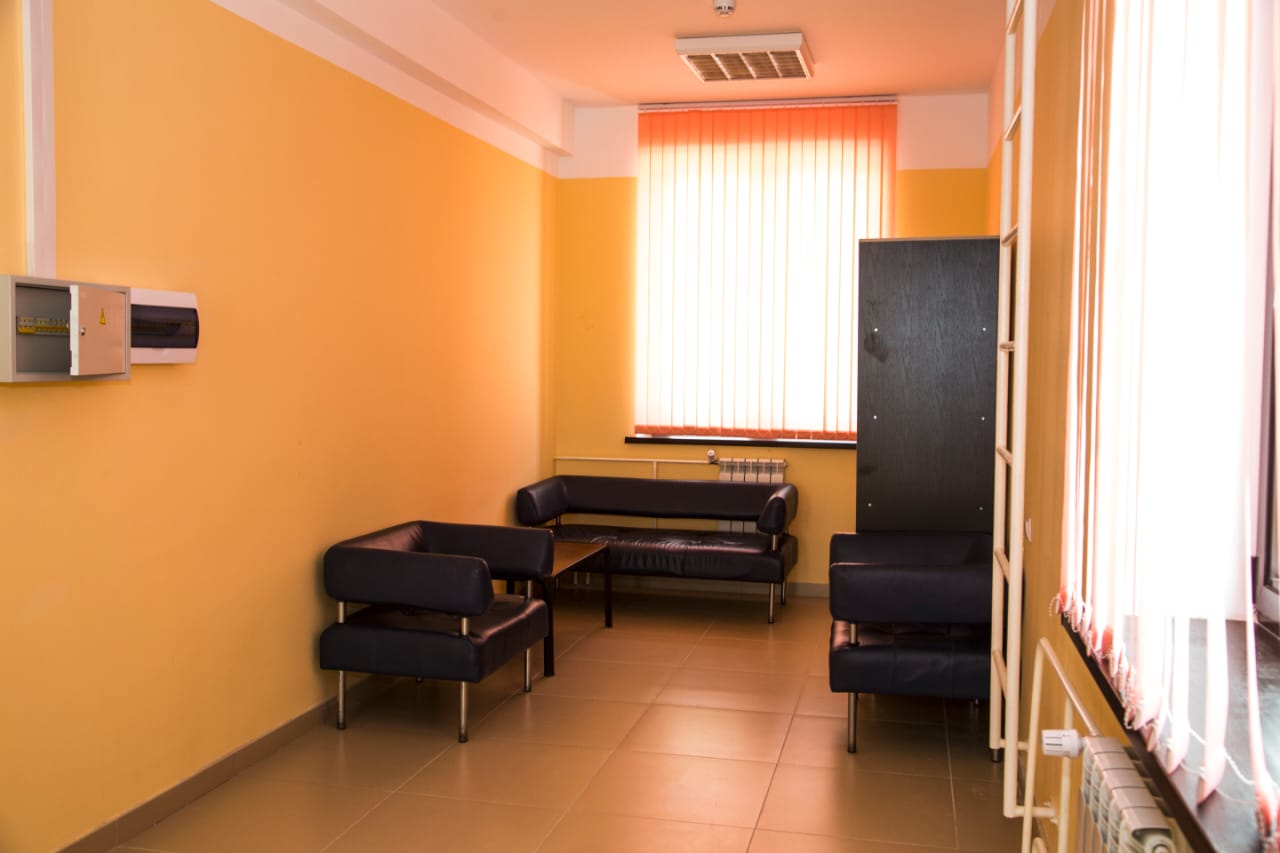 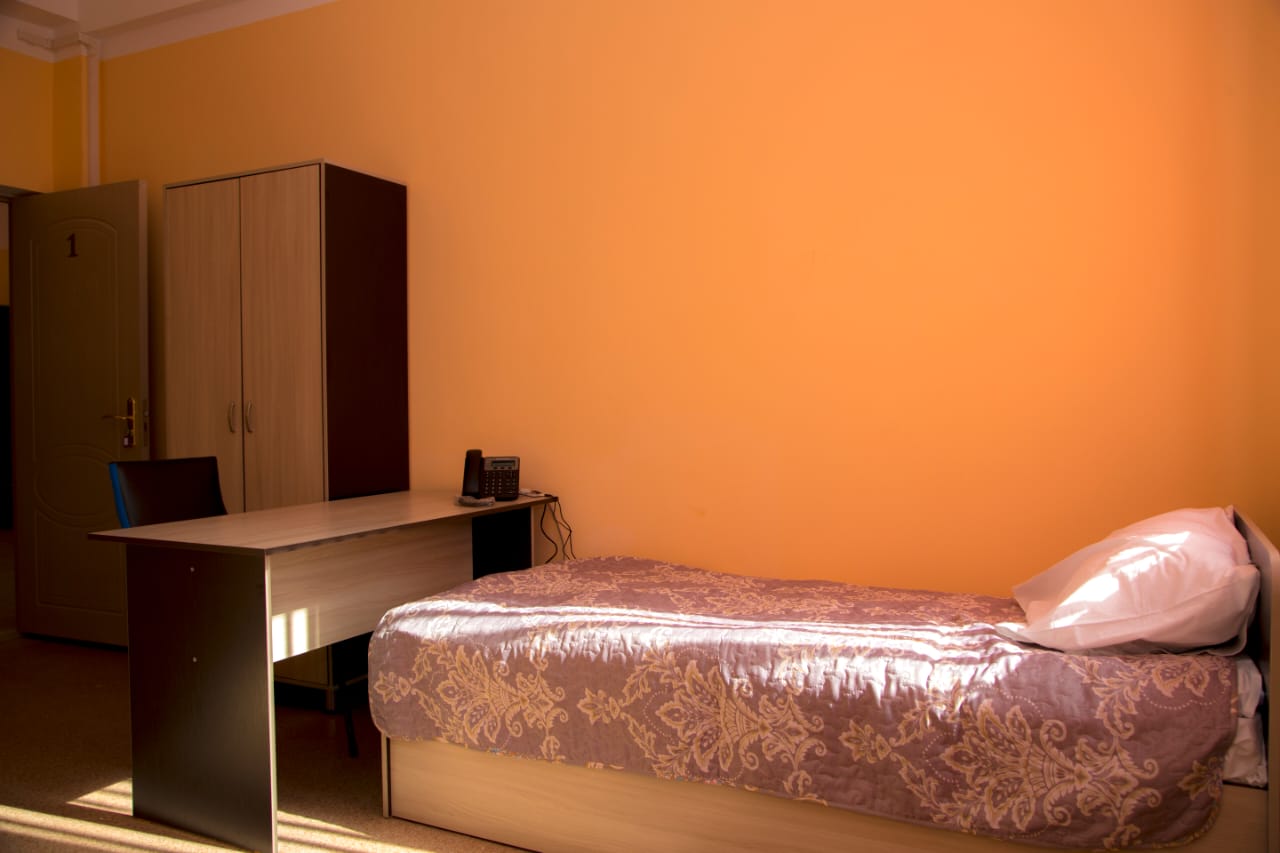