The burial grounds of the complex are located both in the hilly and flat parts of the tract. According to the design features, two types of burials are distinguished: stone fences with boxes and sheets inside and mounds with stone-earth mounds over the graves.

Karakuduk II burial ground, stone boxes and cysts; (N 43º4808,6E 075º3249,8) Bronze Age (13th-12th centuries BC). The monument was discovered and explored on September 9-24, 1957 by the Semirechensk detachment of the South Kazakhstan Archaeological Expedition of the Academy of Sciences of Kaz.SSR under the direction of A.G. Maksimova; excavations were carried out by A.M. Orazbaev, A. A. Charikov, O. M. Gryaznov, etc. The monument belongs to the Semirechensk variant of the Andronovo culture. The burial ground was the first burial ground of the Bronze Age, investigated in Zhetysu

The burial ground consists of 4 cists with adult burials (No. 26-29) and 25 stone boxes with burials of children, symbolic cenotaph graves. The remains of the buried and items of accompanying inventory were found in the graves: clay vessels, jewelry (earrings, beads, clam shell) and a mirror plaque made of bronze. A petroglyph - the image of a goat - was found on the wall of the stone box No. 22. 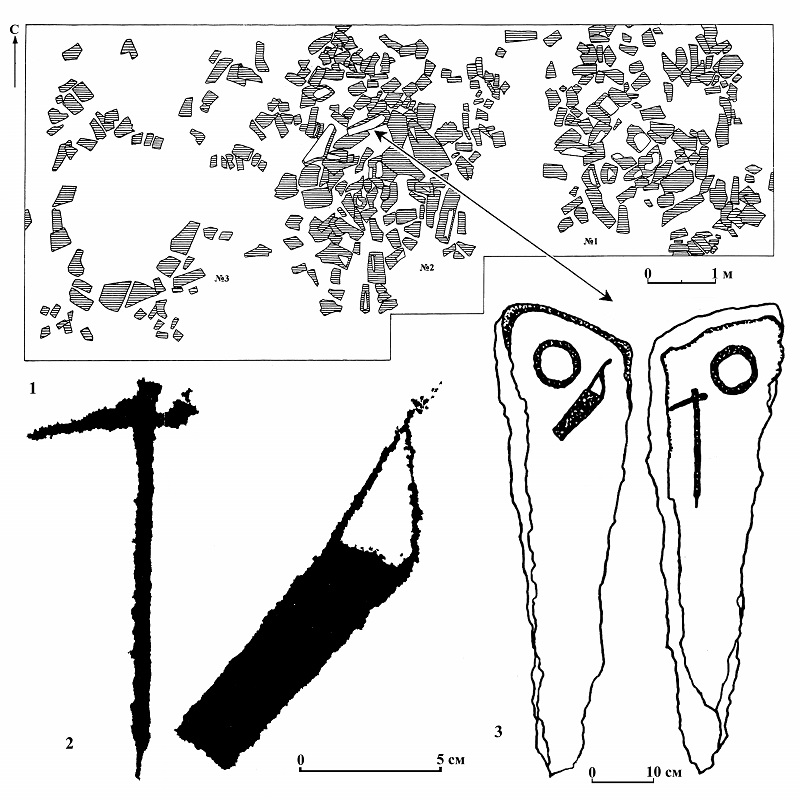 During the excavation of the burial ground, on September 19, 1957, photographer A. A. Popov discovered petroglyphs in the Tamgaly Gorge.

Ritual altars were also found here; the Early Iron Age (5-3 centuries BC). The monument was examined on September 21-24, 1957 by the Semirechensk detachment of the South Kazakhstan Archaeological Expedition of the Academy of Sciences of the Kazakh SSR under the direction of A. G. Maksimova. 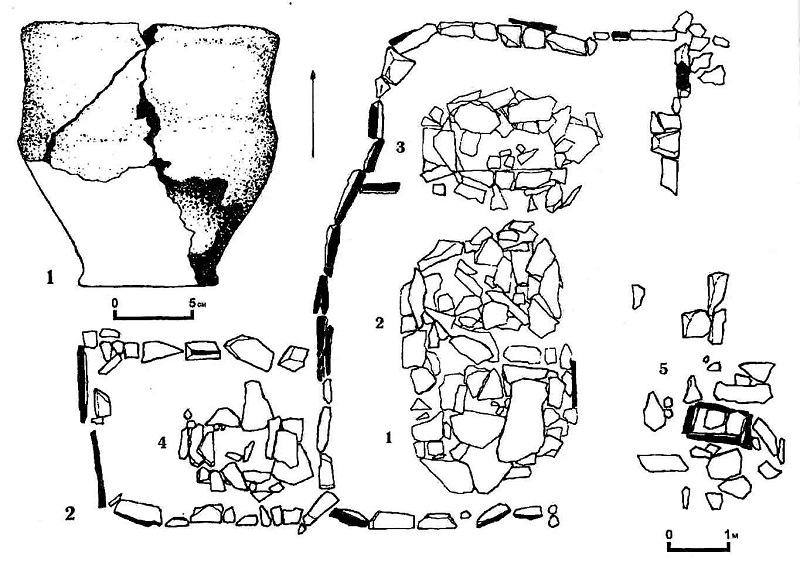 Three ritual stone fences (altars) were intended for performing rituals in honor of deceased ancestors. Inside the middle fence there was a stone-stele ("deer" stone) with images of weapons - a quiver with a bow and a battle axe-chased. To the north of the fences there is a group of large "royal" mounds of the Saka culture.

Tamgaly II Burial ground, (N 43º4825,0E 075º3205,8). The northern part of the burial ground: a stone fence and cysts; the Bronze Age (13th-12th centuries BC). The monument was discovered and explored in 1982 by the Archaeological expedition of KazPI named after Abai under the direction of A. N. Maryashev a. The monument belongs to the Semirechensk variant of the Andronovo culture. 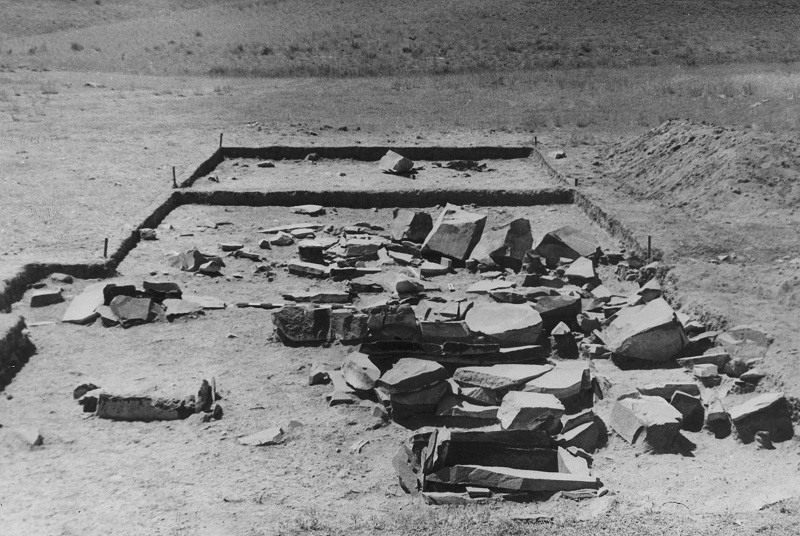 In the fence with an extension there are four graves-cysts, made of untreated stones. Burnt remains of the buried (three elderly men and a woman) and items of accompanying inventory were found in the cysts: clay unornamented vessels and bronze jewelry (beads). Grave grave cremation was performed outside the graves, the burnt bones from all parts of the skeleton are scattered at the bottom of the grave.

The southern part of the burial ground consists of stone cists and boxes with burials of adult women, teenage girls and symbolic cenotaph graves of the same period. The dead were buried crouched, on the left side, with their heads to the west. The graves contained items of burial equipment: clay unornamented vessels and bronze jewelry (earrings, beads).

For the construction of two cysts, stones with petroglyphs were used: in cist No. 9, an image of a circle with a line extending from it (possibly a sketch of a figure of a "sun-headed" deity); in cist No. 11, images of adorants (praying people), a bull (?), a goat, etc. were used on three stones.

The burial ground of Tamgaly IV (N 43º4751,2E 075º3207,15) is located in the extended part of the Tamgaly River valley, on the right bank of the valley. The burials are located on an elevated section of the second over-floodplain terrace, overlain by a slope deluvium and crossed from the east and west by two erosion valleys. About 10 burial structures - cysts in fences and boxes adjacent to the outside - form a continuous chain of west-southwest orientation. One cyst in the fence is located separately 3-4 m to the east.

The excavations were carried out in 1992 by the Tamgalin Archaeological detachment of the IA NAS RK under the leadership of A.E. Rogozhinsky. Four burials have been investigated in the eastern part of the burial ground. The funeral inventory includes vessels, bronze beads and two sets of temporal rings with a bell and a spiral ending.

The typology of burial structures, burial equipment, as well as absolute dates allow us to determine the dating of the burial ground in the interval of the XIII/XII - X centuries BC. 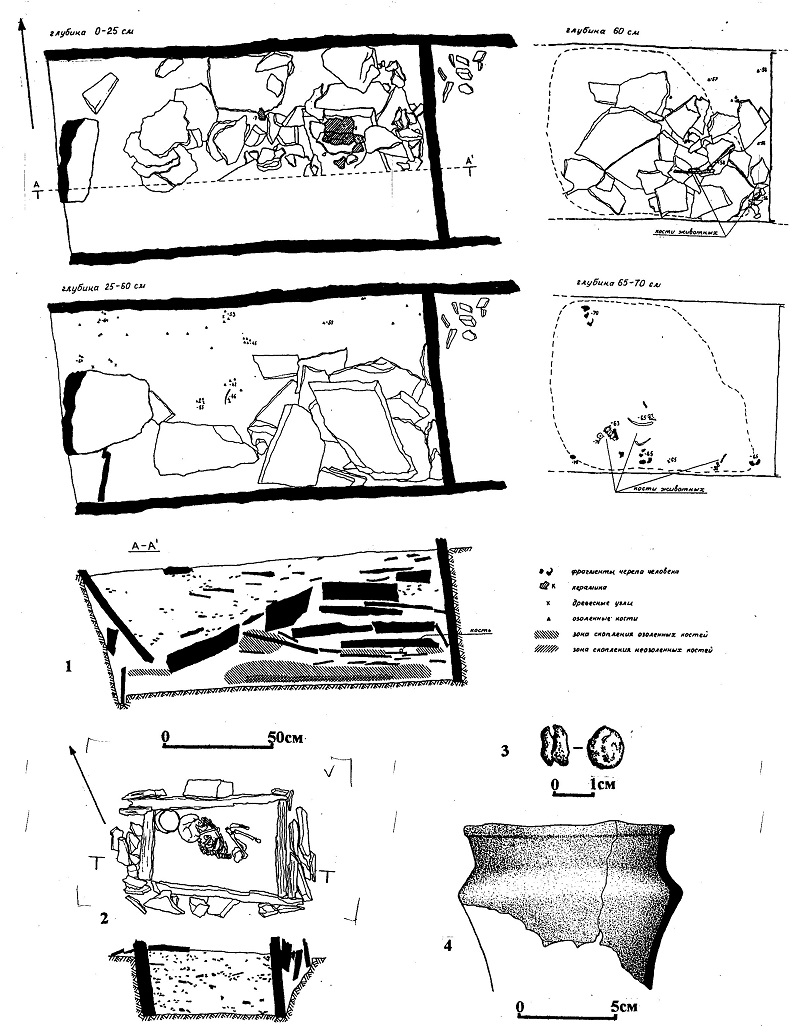 There is a mound to the west of the fence. The mound embankment was destroyed by the road. The supposed dating of the mound is the Early Iron Age.

Excavations of the burial ground were carried out in 1986 by the KazPI expedition.Abaya (ruk. A,N.Maryashev) and in 1989-94. Tamgalin archaeological detachment of IA NAS RK under the leadership of A.E.Rogozhinsky. Two lines of rectangular fences have been partially opened. Inside the fences there is one burial in a box or a cyst. From the north and east near the fences there are "children's" boxes. Burials were found according to the rite of cremation and corpse laying.

The dating of the monument is established according to the typology of things and on the basis of radiocarbon dates in the interval of the second half of the XIV-XII/XI centuries BC. 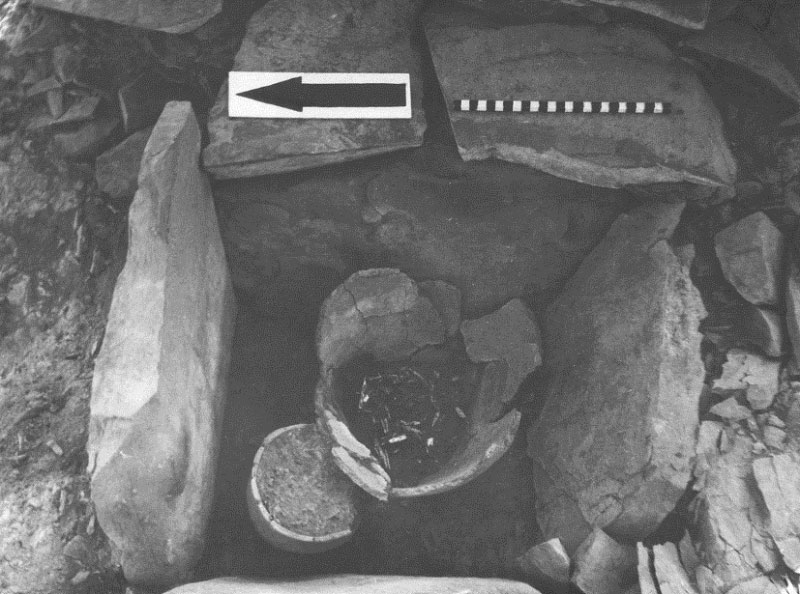